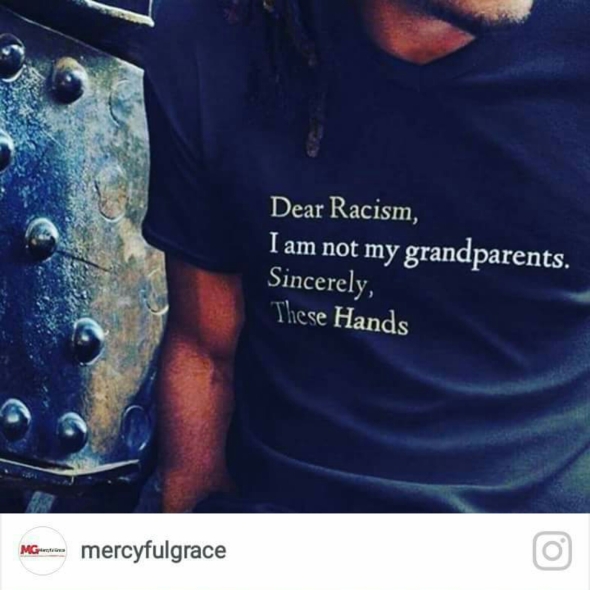 Love. God First. When you realise the self serving opinionated ignorants with no concept of value attacking you can’t even influence your life; positively – you will block them from your spirit, eternally and free your mind. I am the change I want to see ..’

My maternal grandfather, John Henry Scott, spent nights staking out his home and church with a shotgun because racists constantly threaten him for being a voting rights activist.

My paternal grandfather, Henry Toldson, armed himself to defend this son against racists who threaten to lynch his son for cursing at White boy who called him a nigger.

My stepfather, Imari Obadele, served five years in prison, because his organization, the Republic of New Africa, while defending themselves against an illegal raid, killed a police officer in Jackson, MS.

My great grandfather fought in the Civil War in a colored brigade for the Union Army to end slavery.

Our forefathers were Black Panthers who defended their neighborhood against state oppression; The “Negros with Guns” that obtained a charter from the National Rifle Association to arm the NAACP in North Carolina in the 1960s; The men and women who led slave insurrections;

The Black Loyalists who fought with the British colonial forces during the American Revolution to fight against slavery; the occupants of the Negro Fort that fought alongside the Seminoles in Florida against White encroachment; and the countless maroon colonies that fought against racists for freedom every day.

Thank you #Jesus …' Amazing night of old friends and #new #friends with #fun. My table was a beavy of #beauties. Met some #awesome #people and its as #usual on a #positive #note we #part..' My fav part was blessing them with my #original #gospel #songs #live. #Amen #MercyfulGrace #MercyfulGraceDiaries #NeverAroundEp #BLM #CAAwards #GodFirst

In other words, whoever made this shirt, and whoever wears this shirt, should stop dishonoring our grandparents, and use “these hands” to read a book.
Fight ignorance, instead of fighting ignorantly.

What’s your view? Share this with someone! Dont wait. Pass it on ..’